The first themed round, armour, is up and my entry with it. Go to the themed round page to check the other entries out: http://analogue-hobbies-theme-rounds.blogspot.fi/

Being the boring engineer that I am I went with the obvious choice for the Armour themed round. Still to mark the occasion I couldn't just go with any old tank, but had to have something special. So the biggest and meanest of them all, Jagdtiger. 128mm gun that could punch through anything and everything and armour that could withstand nearly any shots from the front. Also far too expensive, too heavy, too few and not very practical. What's not to love :) 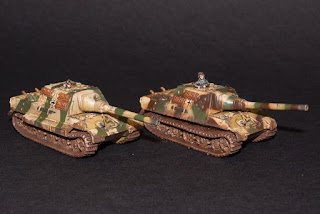 I haven't taken part in themed rounds the last few painting challenges, but with a house renovation having me painting walls instead of miniatures I need any extra points that I can get. I still don't think I'll take part in all of them, but rather take part in those that fit into my ongoing projects. As I need some big kitties for a tournament coming up in a few weeks these were the perfect choice for the first bonus round. 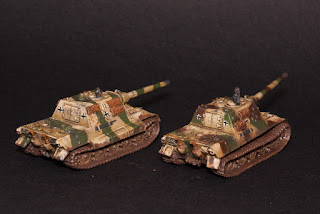 I painted dark yellow with modulation in a few shades to make them pop followed by camouflage. I want to do all my big kitties a bit different to show the haphazard way units were put together in the last desperate months of the war, with vehicles pulled in from everywhere they could be found. The simple green stripes turned out rather nicely, not too happy about the other one though. The camo patches ended up a bit too large for my tastes, but going back and repainting it would have meant I would not have gotten it done for Sunday. Still after the washes it's looking a bit better now. 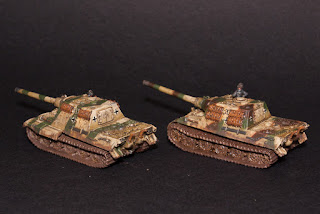 I like my vehicles quite worn looking so heavy enamel washes were used as well as some streaking effects. All of this was topped of with liberal coating of a couple of mud effects. With a tight schedule these guys were actually photographed before the mud effects had dried. It was getting closer to midnight already so I decided to just varnish them later and get the entry ready before going to bed. With a few days gone past, they are now finally done and will be getting their first outing next week to have a few test games before the tournament. 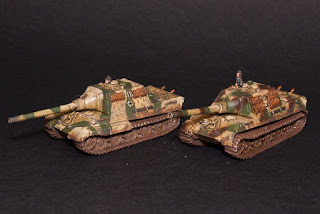 Posted by reggaegirlabouttown at 6:01 AM