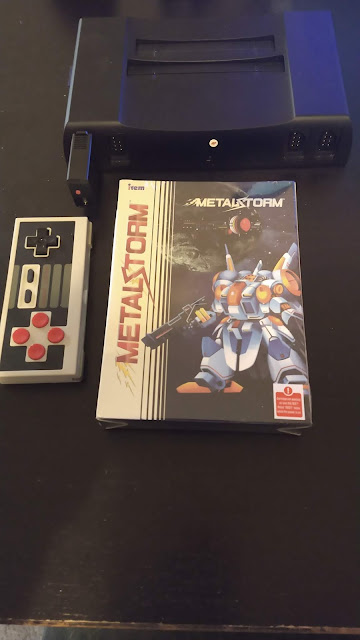 Reproductions of NES games are nothing new, people have been making them and selling them illegally for years.  Recently the retro gaming market has shown such strength and durability that legitimate companies have felt there was sufficient interest in making new copies of original games.  These games would come packaged as "Anniversary Editions" or "Collector's Editions" and come in packaging and with extras that would easily eclipse the original game's.  This of course requires contacting the rights holder and negotiating for permission to release more copies of their game.  Recently, the relatively uncommon but well-regarded NES game Metal Storm received a release from retro-bit and I had the chance for it to come into my possession, so let me use this blog entry to review the game and explain why I had the opportunity to briefly handle it.

I have often in conversation referred to retro-bit as one of the "Four Horsemen of the Retro-Gaming Apocalypse", one of four well-known companies (Hyperkin, atgames and Gamerz-Tek) that have consistently released garbage retro video game products over the years.  They are hardly alone among lousy retro gaming product makers, but they are the most prominent.  Hyperkin can put out a decent controller, so I guess it has graduated, just barely, from the "Horsemen".  Can retro-bit do the same with its release of Metal Storm?  Let's find out.

Read more »
You say "obsessed" as if it is a bad thing.

Posted by reggaegirlabouttown at 2:47 PM